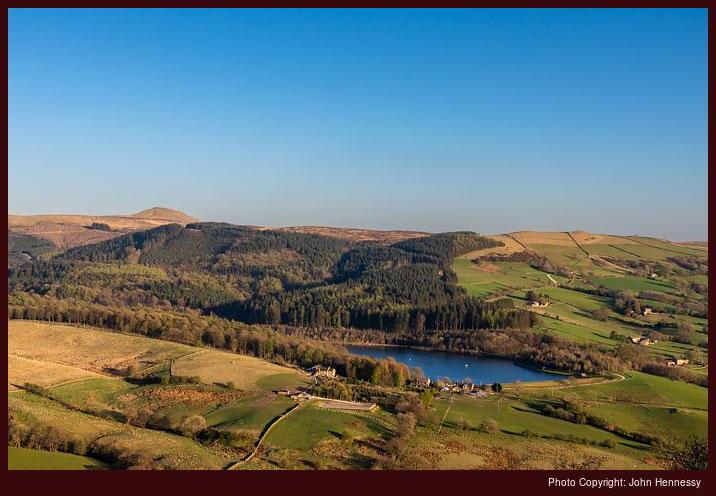 It was the announcement of the Peak District Photography Gallery in Bakewell, Derbyshire that put the thought into my head about setting aside a page for photographers who largely ply their trade or their hobby in the area. However, no one was doing this in isolation, a sensible way to go, so I left the idea sit for a while. What progressed the concept was the opening of an exhibition by Mark Helliwell in Macclesfield Library. The result is that this list is for any photographer concentrating on landscape or urban photography in any way and is based either in Cheshire East or within the Peak District National Park. That scope is more workable and should allow things to develop more. Time will show how it progresses.

A look on what flashes up on the home page for this website reveals that Mr. Brown covers a number of photographic genres with landscape photography being among them. His Peak District scenes come from the counties of Cheshire, Derbyshire and Staffordshire so they fall into the right area for this listing and look very good too. Some photos trips elsewhere appear too with Scotland and more exotic locations falling into this category too. As if to prove that you need a few irons in the proverbial fire, people photography strongly features too, especially in the form of weddings and musicians plying their trade.

Panoramic and monochrome photography find their way into Ian Daisley's repertoire and distinguish his work from others here. There is a lot here that should set me wondering about what I could do with my own efforts.

It's his book of photographs made in the Peak District that caught my attention but he's also a portrait photographer and both feature on the website. Some of the photos from the book have made their way online for the tastefully produced tome. Will there be more?

For some reason, I mix up Karen Frenkel with Fran Halsall in my mind; maybe it's because both have published books to their names though the latter's horizons expand beyond the Peak District so you'll find here listing on another page in this section. That's not to that Frenkel's camera never strays either but it does seem that the Peak District is what offers here the most in terms of inspiration so her efforts gain inclusion here. If you fancy seeing her work in print, there's Peak Landscape and Light, a Frances Lincoln publication that is organised by the months of the year.

You will find a lot of Peak District scenes in Chris Gilbert's galleries and he has one for each of the Celtic tribes who used to live in the area. Naturally, there is more than this too with Scotland and the Lake District getting featured as well.

Is it just me or are there not that many women professional landscape photographers out there? Whatever is the answer to that question, I first encountered this lady's work while perusing landscape portfolio titles out of curiosity in a bookshop. Since then, I have encountered an increasing number of magazine articles that she has written with a feature for Outdoor Photography being one of them. All in all, her star seems to be ascending at the moment.

It is when you look at what others do with locations that are familiar to you and where you have had a go at making your own images that really gets you wondering how you can increase the quality of your own work. That very much is the case with what Mark Helliwell has done in and around Macclesfield. One thing that would not spring to mind immediately about Macclesfield is that it is photogenic. Other places like Buxton, Knutsford, Chester, London or Edinburgh have a greater claim to that title. Nevertheless, there is potential and that got highlighted in an exhibition of Helliwell's work in Macclesfield's library. More obviously scenic locations have seen his attentions too and all is worth savouring.

This is yet another of those photographers who devote a lot of attention to the Peak District and it shows in the photos on the site. Other locations feature too so there are coastal scenes as well as some from the Lake District.

While I tend to take more of an interest in anyone pursuing landscape photography, I have loosened those rules to let in Alex Hyde since he is one of the photographers featured in the Peak District Photography Gallery and lives in the area. All is artfully done and there is the occasional landscape too.

It was a mixture of Twitter and Facebook that brought Michéla Griffith's work to my notice even though I am avoiding joining the latter of these. Most of the images on here feature landscapes, both intimate and wider views, from the Peak District but there are galleries featuring Pembrokeshire and Northumberland coastlines too. The cause of the discovery was the photographer's becoming a Peak District Destination Photographer, which is how some of her images came to be on the Facebook pages of Visit Peak District, the local tourism agency for the area.

Sometimes, one serendipitous discovery leads to another and then another with these photoblogs being examples of that; a website found via Twitter led to a few more by the same person.The first was started last summer and already is bringing pleasing images to the web for perusal by all. Anything that celebrates the western side of the Peak District can be no bad thing; other websites from the same author include Tegg's Nose, Macclesfield Forest, Goyt Valley Online, Stanage Edge as well as Boots and Paws, a walking website featuring a fair number of destinations for that activity. While I wonder if all of those could not be combined into a single website like this one, there's another photo gallery website under the name of the author of all of these and it casts its scope wider like Boots and Paws with the Lake District getting a look in among a number of different locations.